Subaru’s Three-Row Crossover is Worth the Wait

Subaru is on the rise. The small Japanese brand has had 78 months of consecutive growth. It is one of the industry leaders in “conquest” sales — taking customers from other brands — and has the second-highest brand loyalty rate, behind Toyota, according to Edmunds.com. It has capitalized on the crossover craze and eaten away at the market share of the big boys without having a big boy in its lineup. Until now. 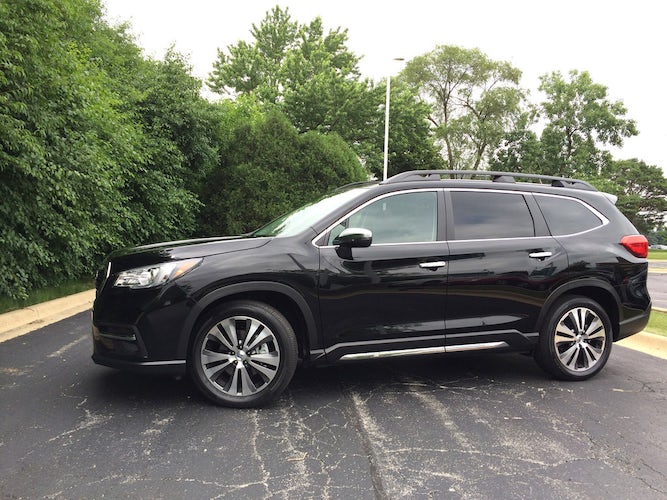 With the 2019 Ascent, Subaru finally has a proper three-row crossover with all-wheel drive safety, off-road capability and full family-hauler functionality.

Let’s be honest: A three-row crossover is as exciting as your second-grader’s artwork. But the Ascent fills a huge void in Subaru’s relatively small lineup and should keep its loyalists in the family as they get families of their own.

Subaru either learned from its mistakes in the wishy-washy Tribeca (2005-14) or learned from being the last automaker to offer a competitive three-row crossover. 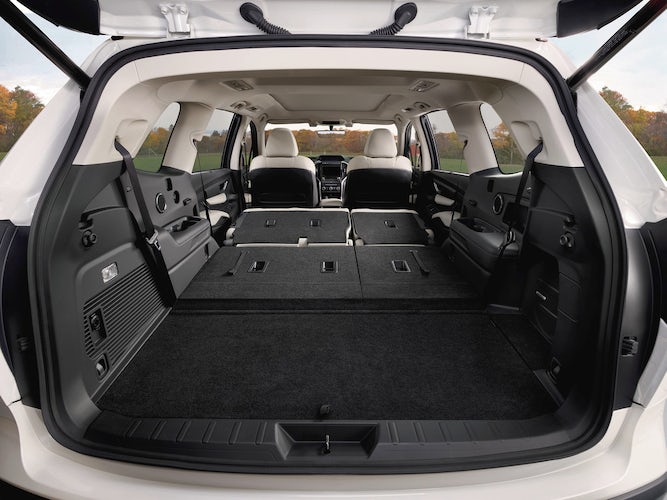 The Ascent drives much smaller than the other latecomer, the Volkswagen Atlas, and feels more like the sporting Mazda CX-9 behind the wheel. It’s a smooth adjustment for consumers going from a smaller crossover or even a car. The all-new turbocharged boxer four-cylinder engine makes 260 horsepower and 277 pound-feet of torque, good enough to tow 5,000 pounds, according to Subaru. That output beats the 3.6-liter flat-6 engine in other Subies, so expect it to be the engine of the future.

The 2019 Subaru Ascent is a three-row crossover powered by a 260-horsepower turbocharged boxer four-cylinder engine with a continuously variable transmission and 19 cupholders. 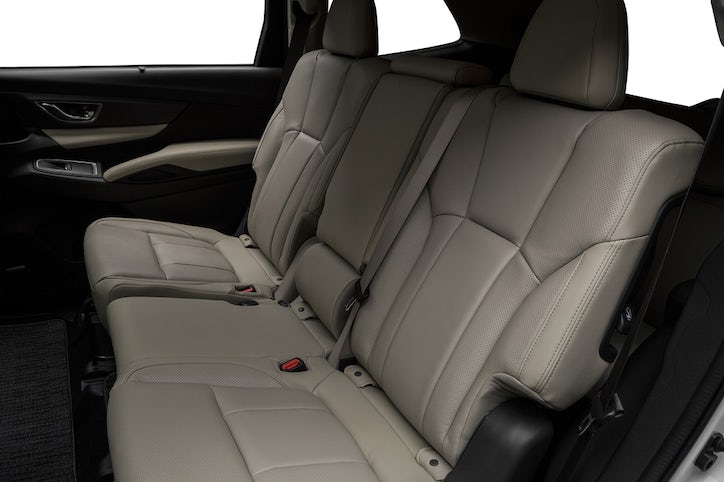 Because the pistons are horizontally opposed, the boxer engine sits lower in the bay and has less vibration than inline or V-6 setups. It makes for a smoother, more nimble ride than other three-row crossovers. The stepped gear ratios in the continuously variable transmission approximate the shift points you’d come to expect in an automatic transmission without the heavy droning and sense of anticipation that comes with other CVTs.

In short, the driver won’t pay much attention to the inner workings of the powertrain. It’s responsive for everyday needs and utilizes Subaru’s effortless all-wheel-drive system with X-Mode, which controls wheel spin at lower speeds.

It sits larger than it rides, unlike the comparatively cramped CX-9. It’s not as roomy as the Atlas or Honda Pilot in the third row, though. Subaru says three child seats could fit, but your knees ride high back there. Like most vehicles in this class, that row is best for grade-schoolers.

Also like the CX-9, Atlas and Ford Explorer, the top of the line Touring trim puts a price on premium. Java brown leather with heated everything contrasts against the black dash with silver accents. A wood-grain console gives it that upscale touch, while the center stack has big climate and audio knobs for the gloved among us in the Snow Belt. 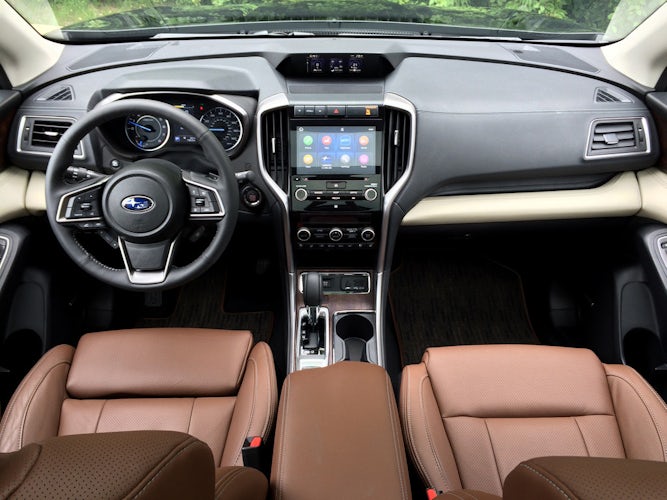 There are essentially three vehicle info display areas, with some redundancy. The 8-inch touch screen is mainly for navigation and for the passenger to have a say in audio controls or to play with apps. Above the center stack embedded in the dash is Subaru’s multifunction display, which shows a more detailed look at what systems are in use, such as torque distribution or the engaged elements of Eye Sight — Subaru’s excellent suite of advanced driver assistance systems.

After getting over my skepticism at more screens, I came to appreciate seeing in one place what lane-keep assist was doing with blind-spot alert and adaptive cruise control instead of glancing at icons in the gauge cluster. The vehicle info display in the gauge cluster shows speedometer, fuel economy, trip meters and more. The only confusing part is remembering where the buttons are to play with each one.

Also nice to play with are the 19 cup holders; parents won’t be surprised by how quickly they fill with non-cup kid stuff. Touring has six USB ports instead of four, including two in the third row. The second row comes with captain’s chairs with knob-ish handles on top to help third-row passengers climb in or out. Subtle, clever, Subaru. At this price point it would have been nice to have headrests that collapse when pulling the strap to collapse the third row.

Ascent has a relatively low load floor despite having 8.7 inches of ground clearance for modest but capable off-roading. The doors open wide for easy access and the cargo area is wide on top and bottom to load two hockey bags vertically and still fit seven passengers. And those roof rails can support a roof tent, which evidently is a thing.

It’s all very easy, which should be welcome relief to anyone hauling kids.

In a market overrun with three-row crossovers, Subaru needed the Ascent more than the market needed it. But Ascent should keep Subaru trending upward.

AT A GLANCE: 2019 Subaru Ascent Touring