For people who aren’t into the Subaru lifestyle—by which I mean hooligan-rally life, not the Quaker-modest, outdoorsy version—driving 800 round-trip miles from Brooklyn to Maine and back in a WRX STI Type RA might seem a chore. For people who love the WRX the way New Englanders love their Subaru wagons and SUVs, the trip would be so fun that they might swing around and do it all over again. It is, truly, an amazing car.

As long as you don’t linger over a-shade-below-$50,000 price, making this the most expensive Subaru ever. 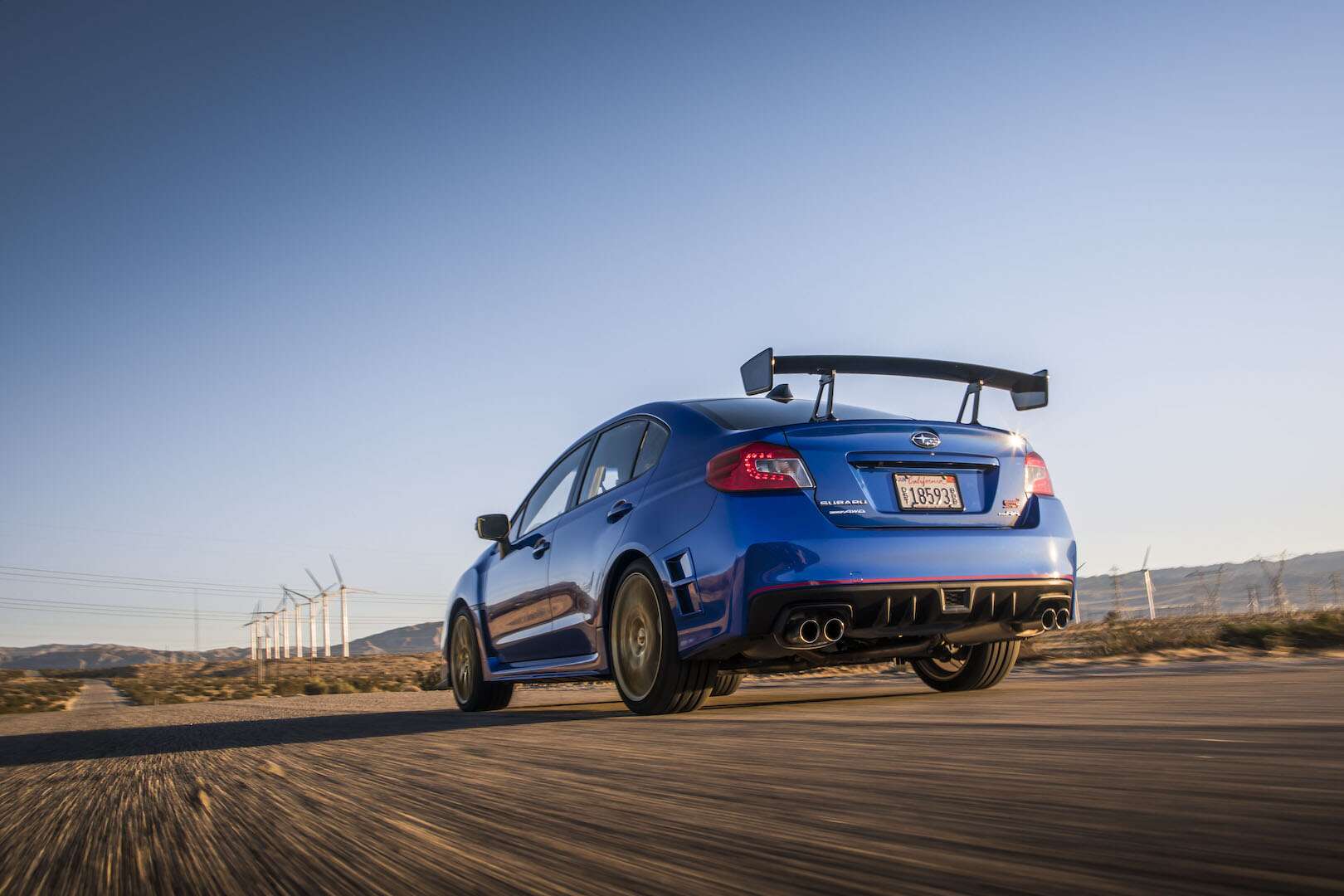 That drive had a dual purpose, three if you count this review: A Dodge Challenger drive at the wonderfully topographical Club Motorsports track, followed by a weekend with family in coastal St. George, ME. The Drive’s Josh Condon drove the Type RA (the letters stand for “Record Attempt”) at the Thermal Club in California, but this was my first shot at this limited-edition WRX, with just 500 copies coming to North America for 2018. And my Subie tester looked resplendent in its bright blue paint with 19-inch, gold BBS wheels—or as resplendent as any Impreza-based sedan can be. The Type RA adds sharp red “cherry blossom” accents inside and out, silver brake calipers, an front underspoiler to aid stability, a structural carbon-fiber roof, and a carbon-fiber wing that’s big enough to iron a hamper full of Affliction shirts. The roof saves eight pounds versus the standard steel top, and dumping the spare tire results in a total savings of 68 pounds versus a standard STI.

For most cars, I’d want to tear that juvenile wing off before the police could pull me over, or before some smartass posted a mocking photo of me on Instagram. But that carbon-fiber parasail is so true to this Subaru’s nature that eliminating it would be a shame. (Subaru notes that the wing does deliver functional downforce, even at normal freeway speeds.) 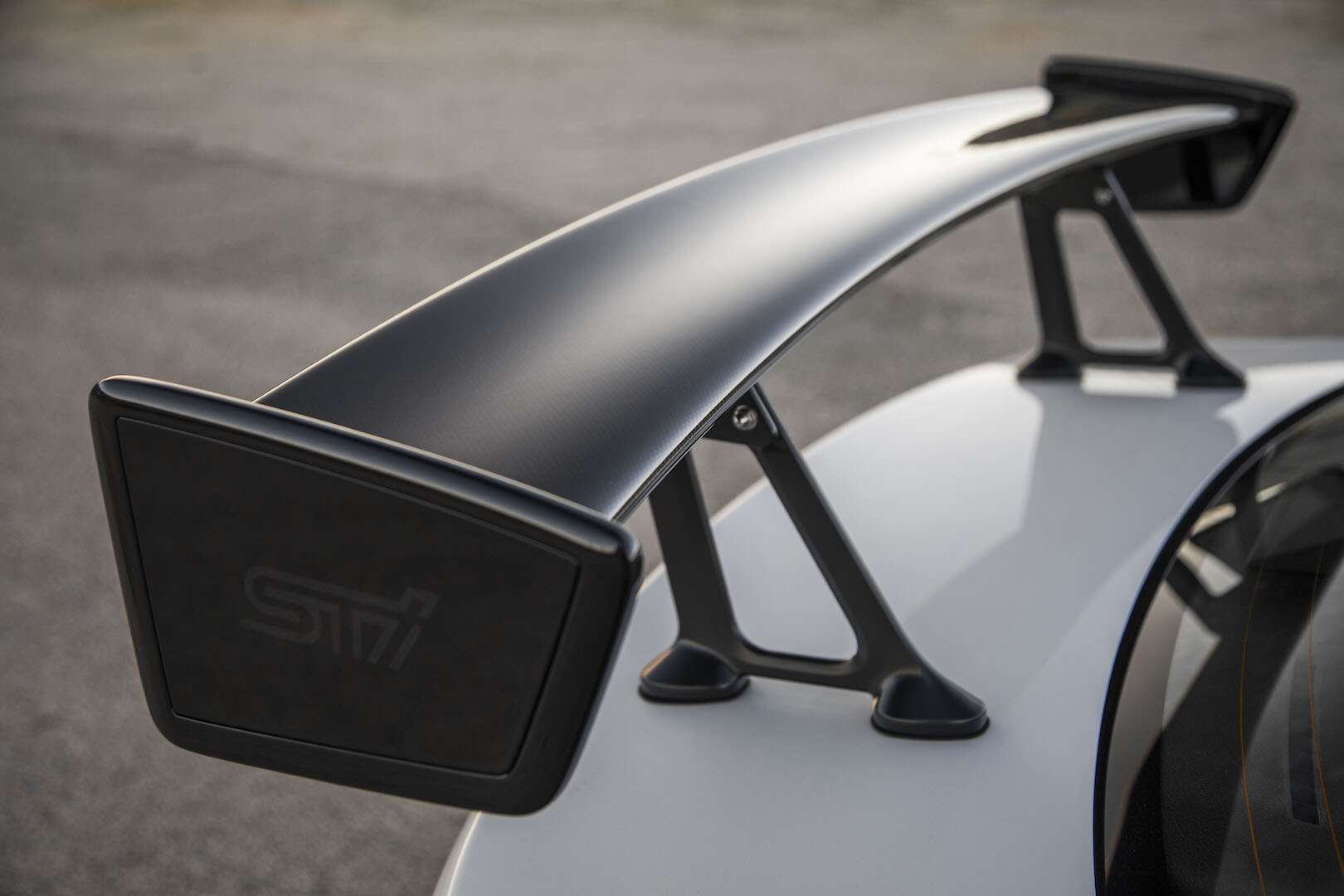 Pleasures are sparser inside, where this fancy Impreza doesn’t keep up with its rate of inflation. The steering wheel is perfect, with its thick ligature, flat bottom, and grippy ultrasuede wrap. The Type RA also scores Recaro seats that are well-bolstered but not obnoxiously unyielding; I felt fresh in the saddle after a crack-of-dawn return to Brooklyn that covered 393 miles in precisely six hours and two minutes. But the infotainment system feels vintage, and not in a charming way; I can’t count how many times I twirled the stubby volume and accidentally changed the radio station by brushing the touchscreen.

Vintage also describes the Type RA’s turbocharged, 2.5-liter, four-cylinder boxer engine. Credit or curse Subaru’s stubbornness, but it’s quite satisfied with the 310-horsepower output that’s just five ponies more than a standard STI, and 10 more than the STI’s output back when George W. Bush was slapping John Kerry around. Torque holds steady at 290 pound-feet, but Subaru says it arrives earlier in the powerband than in other STIs. 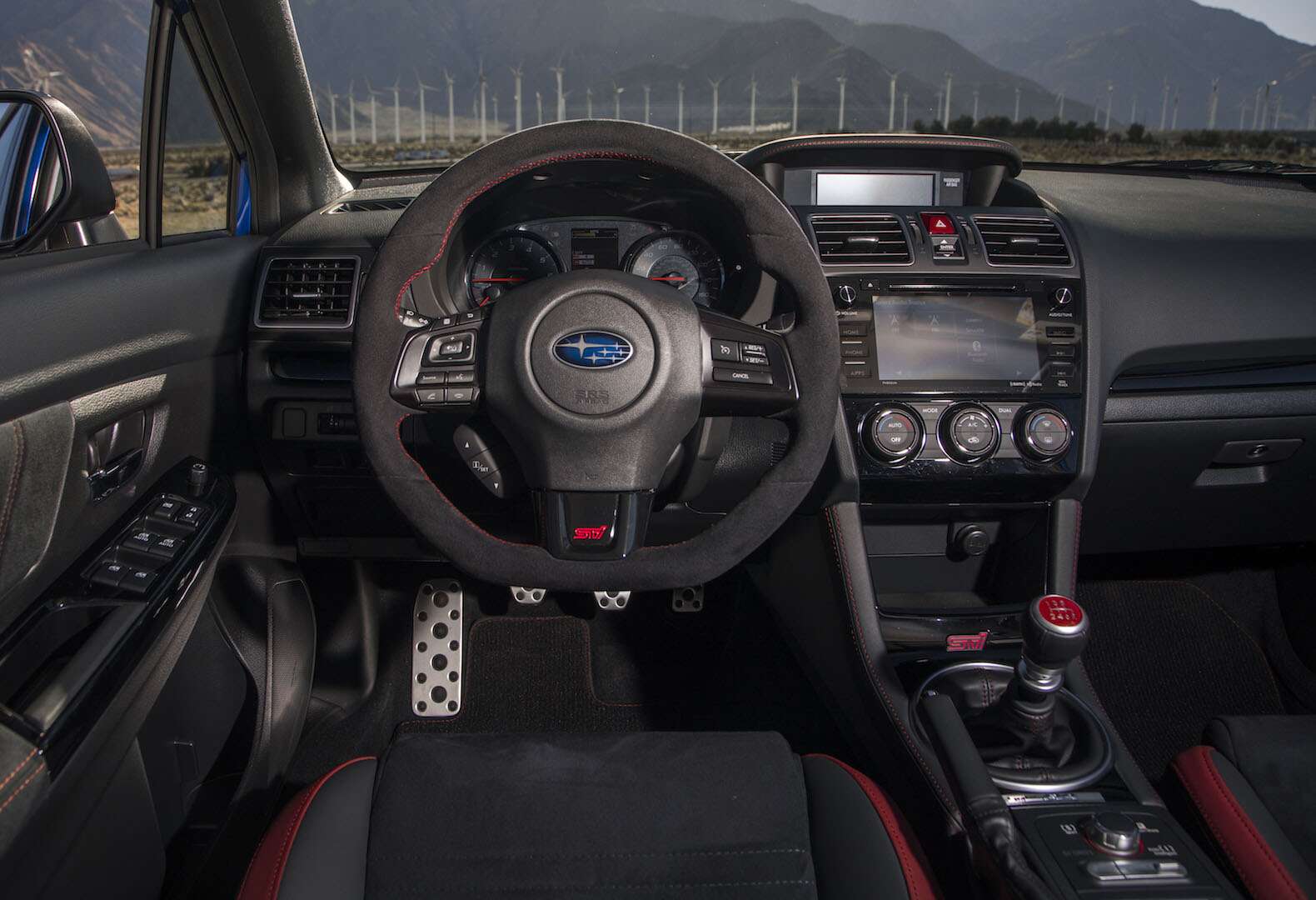 A Subaru tuner can squeeze 30 more horsepower out of this engine while standing under his shady tree, and he may still want to. It must be said: By Subaru standards, the Type RA’s $12,900 performance upcharge is the equivalent of a second mortgage. Even a free-spending Mercedes-AMG or BMW M buyer has come to expect a generous spike in power for that kind of money. (In Subaru’s defense, in an apples-to-apples comparison with an STI with optional Recaros and other features that are standard on the Type RA, the RA’s price premium is closer to $10,500.)

Instead of making headlines with hefty power upgrades, Subaru prioritized sharper engine response and durability for high-stress track use. There’s a retuned ECU and unique cold-air intake; an exhaust system with 50-percent less backpressure; and stronger cast pistons and sodium-filled valves. A shorter ratio in third gear makes for a more-aggressive run to the 7,000-rpm redline. Brembo brakes get stronger monoblock six-piston calipers in front, two-piston units at the rear, and cross-drilled rotors all around. New brake pads expand their surface area for improved feel and fade resistance. Bilstein dampers make their first appearance in a Subaru, part of a retuned suspension. An STI front underspoiler keeps things stable at high speeds.

The changes are expensive, but they do add up. This STI is a wound-up terrier that just wants to race around the yard, and then get loose to chase the neighbors’ cars. The Type RA is incredibly composed and tossable, and it wants to go fast even when its driver feels like going slow. That prickly, raucous personality stands in contrast to a Volkswagen Golf R or Audi S3/S4, with their punctilious interiors and more-refined manners. 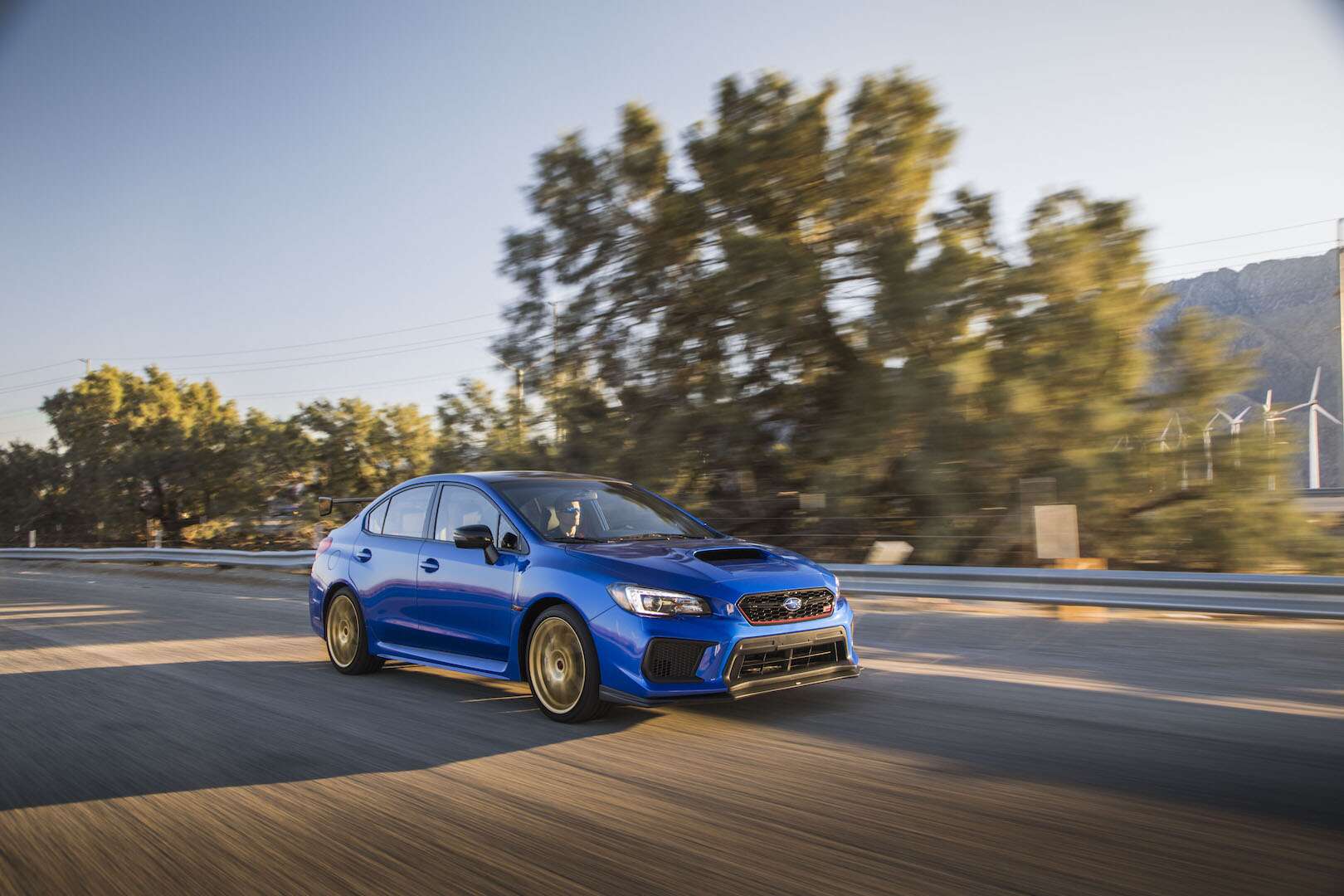 The workhorse EJ257 boxer-four yanks the Subaru to 60 mph in a company-tested 5.4 seconds, 0.1-seconds quicker than a standard STI. The ultimate WRX is plenty fast, but it’s never been a straight-line car. It’s a backroad delinquent that also lives for low-traction conditions—snow, wet, gravel—that stymie lesser machines. Like every 2018 STI, the RA gets a revised limited-slip center differential for its torque-vectoring AWD system, now with exclusively electronic control (versus a blend of mechanical and electronic oversight) for faster, smoother response to wheel slip.

Go ahead, make a mistake: The Subaru will just sort it out, a bit like a junior-varsity Nissan GT-R. At deserted 90-degree intersections and freeway onramps, I find myself going too fast on purpose—oh, I’m sorry, is this my turn?—and just chucking the Subaru into the corners. The Yokohama Advan tires shriek, the car scrubs some speed, and then it’s just back on the gas and on my way. The steering is beautifully reactive and connected, though occasionally twitchy, with an input resulting in a greater change of direction than planned. But again, it’s all part of the fun. 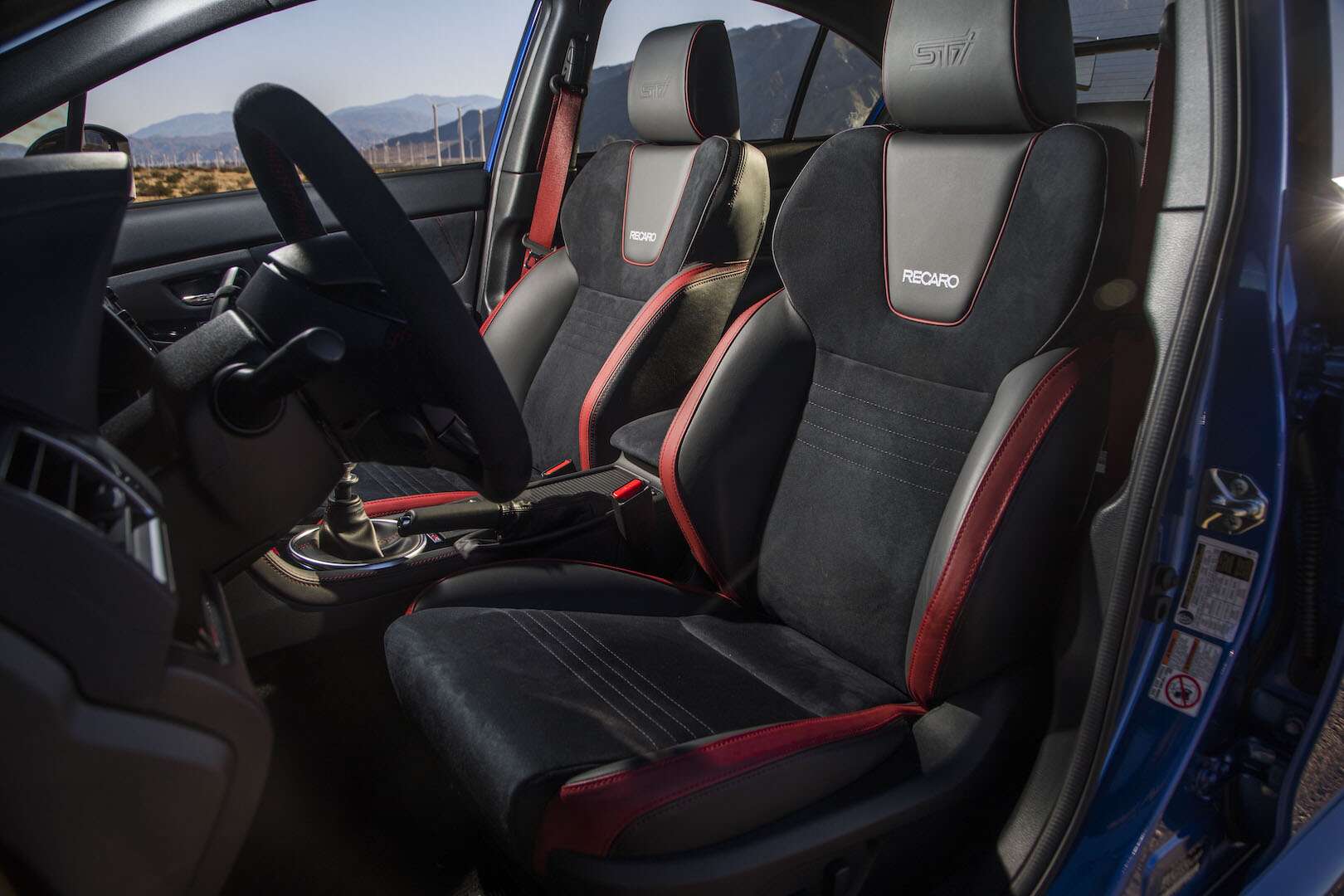 Not all is perfect. As in every STI, the clutch pedal is needlessly stiff—enough to wear my left thigh out during a long weekend traffic jam near Reds’ Eats, the famous lobster-roll shack in Wiscasset. With the clutch engagement abrupt and near the top of the pedal travel, it’s hard to avoid lurching starts and gear changes or first-gear stalls unless you’re paying close attention. Passengers, especially those accustomed to sleepy commuter cars, tend to lose patience with all the visceral sensation and g-forces, even when you swear on a holy rally book that you’re trying to drive smoothly. But the weakest performance link connects to your right arm: The six-speed, short-throw shifter is notchy, gummy, and prone to blown downshifts. The full clutch/shifter arrangement seems especially rocky in comparison with the silken unit in the Honda Civic Type R. Of course, the problems—and maybe those kvetching passengers—largely go away if you just drive hard, all the time. Which, again, is exactly what the Type RA prefers.

Members of the WRX and Japanese-performance cults will get all that. Since many of those fans are accustomed to throwing bushels of cash at tuner shops— or spending that money and time on DIY projects—Subaru will have no trouble putting 500 of them aboard its best-performing car yet. For my money, a Subaru WRX at $49,865? Nuh-uh. But for true believers, this WRX will seem every bit as special as the equally hoon-worthy Ford Focus RS; or, to a muscle-worshiping Motown cult, the 797-hp Dodge Hellcat Redeye I had come to Maine to test. To drive home the exclusive message, each of these 500 Type RAs gets an individually numbered plaque on the center console.

Over four days in Maine and New Hampshire, I saw so many Subarus that it seemed like a surreal, automotive version of Invasion of the Body Snatchers. In one supermarket lot, I counted six Outbacks, Foresters and Crosstreks—in the single row I’d parked in. But even in this Subaru hotbed, I didn’t spot a single WRX STI the entire time I was there, let alone a Type RA. I’m picturing the guy in Maine who ends up with this rarest and most expensive of Subarus, the open road stretching in all directions. All I can say is, God help the neighbors.